Return Of The Backs

As the fantasy football season approaches Week 6, trades are likely to be plentiful ahead of deadlines and waiver wires are scoured in search of the weekly play at running back or volume-heavy wide receiver to complement your flex options.

Even so, there is still time to enact the moves necessary to ignite a mid-season surge, regardless of where you rank in the standings.

Let’s take a look at some must-starts and adds to consider ahead of your Week 6 matchups: 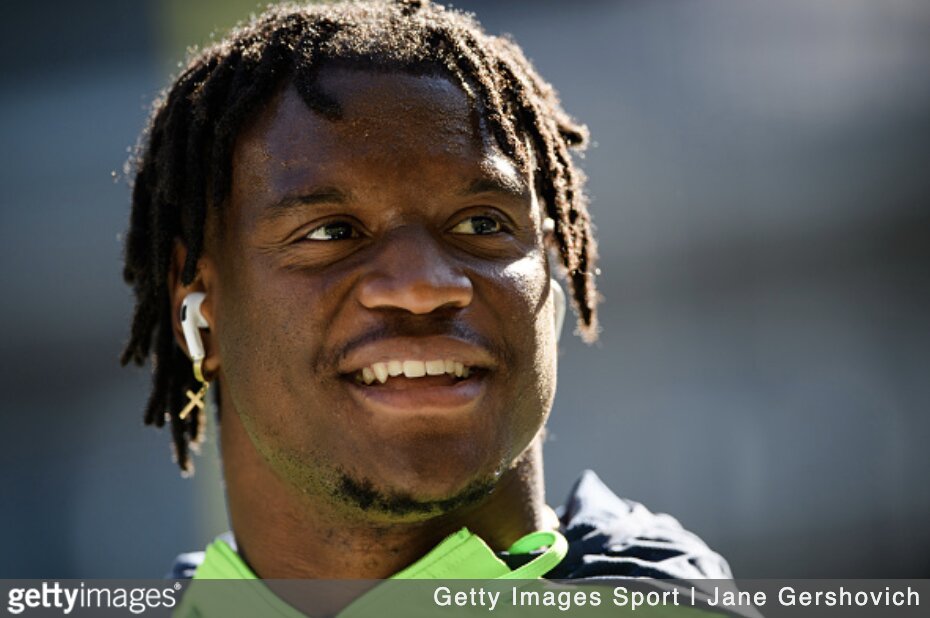 Seahawks RB Kenneth Walker is one of many former backups who are now RB1.

RB Eno Benjamin, Arizona Cardinals: Benjamin found the end zone against the Eagles last week and became the Cardinals’ de facto lead back amid a slew of injuries to its backfield last week. Monitor the status of James Conner and Darrel Williams throughout the week, but Benjamin has proven himself as an effective option when called upon.

RB Mike Boone, Denver Broncos: Boone served as the primary backup to Melvin Gordon last week and totaled 10 touches. As long as Boone has a role, he has value and should be stashed in deeper leagues.

WR Jakobi Meyers, New England Patriots: Meyers awoke from a two-week slumber against the Lions, corralling 8-of-11 targets for 111 yards and a rare touchdown, reminding many how integral the veteran pass-catcher is to New England’s passing game when healthy. Meyers, who has considerable appeal in PPR formats, should be added to rosters across all formats.

WR Isaiah McKenzie, Buffalo Bills: Prior to being sidelined last week with a concussion, McKenzie’s snap and target share have been on the rise. With his role becoming more clearly defined, McKenzie needs to be stashed in 12-man leagues or more.

RB Isiah Pacheco, Kansas City Chiefs: The former Rutgers standout should remain on fantasy radars with mid-to-late season upside in mind. With the explosive Kansas City approaching midseason form — and typically producing a myriad of fantasy-relevant options — Pacheco figures to have a defined role working in concert with running back Clyde Edwards-Helaire.

WR Khalil Shakir, Buffalo Bills: With WRs Jamison Crowder and Isaiah McKenzie shelved for Week 5, Shakir assumed the third receiver role in Buffalo’s high-octane aerial attack, producing three receptions for 75 yards along with his first NFL touchdown. A more complete pass-catcher than Crowder and McKenzie, the thought here is that Shakir carves out a more substantial role as the season progresses.

RB Rhamondre Stevenson, New England Patriots: For the time-being, the Patriots’ backfield belongs solely to Stevenson. With Damien Harris (hamstring) on the mend, Stevenson could conceivably shoulder upwards of 20 carries against a Browns defense ranked 30th against fantasy running backs. His projected volume should put him in the RB1 category for Week 6.

RB Breece Hall, New York Jets: Patient fantasy owners were rewarded with Hall’s inevitable coming out party, which accounted for 197 scrimmage yards in the Jets’ 40-17 win over the Miami Dolphins. While I wouldn’t anticipate another headline-grabbing outing in Green Bay on Sunday, Hall’s talent and the Jets’ apparent commitment to the run catapults him up my weekly rankings.

RB Ken Walker III, Seattle Seahawks: Walker turned eight carries into 88 yards and a touchdown against the Saints last week and is decidedly ahead of DeeJay Dallas in the pecking order, so it’s a safe assumption that the Michigan State product will receive the lion’s share of the snaps moving forward. Walker draws a stingy Arizona run defense this week, but his upside and opportunities make him a must-start.

WR Tyler Lockett, Seattle Seahawks: Coming off a 104-yard, two-touchdown performance against the Saints, Lockett has been remarkably consistent through five weeks and has established a rapport with quarterback Geno Smith. Plug him into your lineups as a WR2 with upside against the Arizona Cardinals.

WR Christian Kirk, Jacksonville Jaguars: Kirk has gone radio silent the past two weeks, yielding just three receptions for 71 yards on 12 targets, but draws a favorable matchup in the Indianapolis Colts. You may remember, it was Kirk who terrorized the Colts’ secondary in Week 2, totaling six receptions for 78 yards and two scores. I think Jacksonville’s prized free-agent add gets back on track this week.

WR Amari Cooper, Cleveland Browns: Cooper has seen double-digit targets in three of the Brown’s first five games, and is coming off a 76-yard, one-touchdown performance in which he commanded 12 targets. I suspect he’ll see another 10-plus targets at home against the Patriots on Sunday.