ITB: Pederson Brings (Another) Ball Control Offense Back To Linc

Another reunion is on deck Sunday, as former Philadelphia Eagles head coach Doug Pederson returns with his new team, the Jacksonville Jaguars.

The 3-0 Eagles might be facing their biggest challenge of the season so far, as 2-1 Jacksonville boasts a top-10 scoring offense and defense.

On the latest episode of the Inside The Birds podcast, Adam Caplan and Geoff Mosher previewed the Week 4 matchup against Jacksonville and gave game predictions. 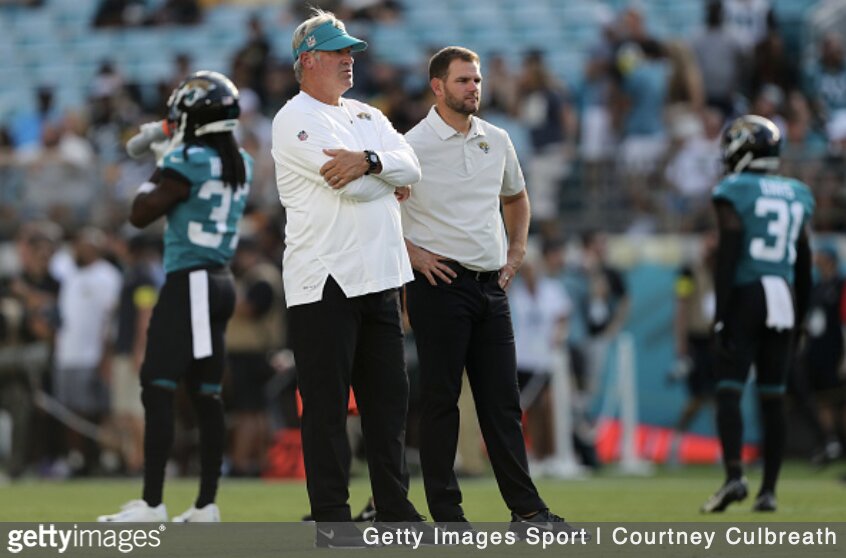 The Jaguars have improved tremendously in just three games under Doug Pederson’s leadership.

Geoff Mosher: “The Jaguars offense is a ball-control, time-of-possession offense. I believe right now they are ranked No. 2 in the NFL in time of possession. The Eagles were one or two in time of possession in three of his first four years. That is the epitome of a Doug Pederson offense: it’s careful, it can hit you in multiple different ways, and of course, he’s got Trevor Lawrence playing really good football right now.”

Adam Caplan: “Their line is not protecting great, but what they’re doing is they’re getting the ball out of Lawrence’s hands in 2.3 seconds or less and it’s negating their pass protection, which is not great. Brandon Linder, their center, retired, and they’re going with a revamped line. (Brandon) Scherff is a stud; his problem with Washington was injury. Jawaan Taylor has been a disappointment at right tackle, Cam Robinson’s a decent left tackle. I’m kind of shocked they extended his contract. (Luke) Fortner’s their center, who Greg Cosell loves. Ben Bartch is a first-time starter at left guard. They’re OK, but here’s the thing: if (Fletcher) Cox and (Javon) Hargrave bring their A-game, they’re going to dominate this game. Their line isn’t that good.”

Mosher: “What they are facing this week with Jacksonville is a very athletic front seven. They’re getting really good linebacker play from their two additions: one being the draft pick of Devin Lloyd, the other being Foyesade Oluokun.”

Caplan: “(Defensive Coordinator) Mike Caldwell plays a 34 front, he mirrors everything off of his mentor Todd Bowles. They worked together for like 20 years. This is the first time has has called plays and he’s doing an excellent job, he’s very aggressive. This is a (GM) Trent Baalke team. He wants height, weight, speed. Their D-linemen are long. Their front seven is athletic and they have pass rushers.”

Mosher: “The interesting matchup to watch is – will they come after Jalen Hurts defensively, because Mike Caldwell is a former Eagles linebacker under Jim Johnson and he’s coached under Todd Bowles. We know Todd Bowles likes to blitz, we know that Jim Johnson was a selectively good blitzer, so I’m sure Mike Caldwell’s got some interesting ideas on what he wants to do. What I’m fascinated to see is with an athletic player that’s he got in Devin Lloyd, is that maybe his chess piece in trying to slow down in Jalen Hurts?”

Mosher: “I also thought it was going to be a low-scoring game, even without the rain. I just like the way these two defenses are playing right now. I have Eagles 24, Jaguars 17.”