On the latest edition of the Inside The Birds Podcast, Adam Caplan and Geoff Mosher preview the Eagles-Commanders matchup at FedEx Field: 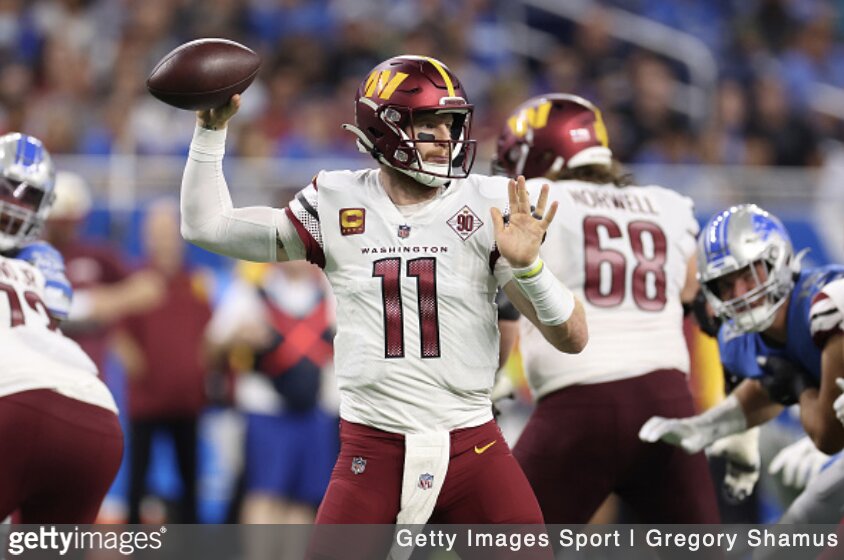 Old friend Carson Wentz will face off against his former team for the first time on Sunday.

Geoff Mosher: “On third down last year, I recall Washington coming after [Jalen] Hurts more than once or twice. I don’t think they are going to do what the Lions did, but I can’t imagine Jack Del Rio is going to watch tape from last week and say, ‘We have better personnel, so we’ll just sit in the same zone.’ I think he’s going to have to try to force the issue at times on Jalen Hurts, and he’s got an athletic front seven to do that.”

Adam Caplan: “Hurts is so good with his legs and he’s so accurate now, you don’t want to say he puts fear, but hearing what Dan Campbell said on the Monday after the (first) game and hearing Ron Rivera talk after the game and hearing their defensive coordinator Del Rio talk, they acknowledge this is a challenge playing against Jalen Hurts because now he’s got his accuracy under control, he’s not bailing, and he’s got good arm strength, he clearly has enough. And with this pass target group, good luck.”

Mosher: “It’s not going to be a night off for Jordan Mailata just because of no Chase Young, because I’m pretty sure Jack [Del Rio] likes to move Montez Sweat around a little. I think you’ll see Montez Sweat over Mailata and over Lane Johnson at times, but compared to some other teams who can bring it from right and left, it feels like whoever he’s lined up over, the other [offensive tackle] got that play off. It might be Casey Toohill, it’s just not going to be somebody that is a household name.”

Caplan: “They (Eagles o-line) should have no problem handling this front. They know it well, they’ve faced them. They have arguably the best offensive line coach in football.”

Mosher: “The matchup inside to watch is (Isaac) Seumalo versus Jonathan Allen, because there have been a couple of times this year watching the games where I thought Seumalo, and remember he’s still adjusting to right guard instead of left, where he just didn’t have his leverage. He had trouble anchoring and maintaining his leverage, and that’s usually one of his strengths. That’s why he’s the right guard and not Jack Driscoll, because he can kind of dig his feet into the ground and use that strength. But when you’re going up against Jonathan Allen who’s 300+ pounds and equally strong and a first round pick and fast and has a variety of moves, if there’s one guy or one matchup that I’m going to have my eyes on would be Jonathan Allen versus Isaac Seumalo.”

Mosher: “Some really interesting stats I dug up is they are one of the best teams so far in third down and in red zone. I think they are five for five in red zone, meaning they scored a touchdown in all five trips to the red zone. For a team that doesn’t have a good offensive line, that’s pretty tough to do… They are leading the NFL in receptions at 20 or more yards at 10 and they are second in the NFL in receptions of 40 or more yards, they’ve had two.”

Caplan: “What’s been really positive talking to Washington is Curtis Samuel, who is a guy that Ron Rivera and Scott Turner had in Carolina, they really like this guy. He’ll run the ball, end arounds, jet motion, they’ll have him play the slot. The area where he struggles is on deeper routes. He’s unable to fight off the defender. But he’s incredibly gifted in the slot and getting yards after the catch inside.”

Mosher: “Javon Hargrave has to win against Trai Turner, and he has to win to the point where it’s a four-man rush and you’re pinching the pocket and you’re moving Carson Wentz around. The issue with bringing more blitzes against Carson Wentz is, yes he will screw up at times, but he’s also going to burn you at times in a way that Kirk Cousins and Jared Goff wouldn’t, because he’s got the athleticism, arm, and the weapons around him to do it, and he’s not afraid like those other two. He will take the hits and he will keep coming after you. So if you’re blitzing and blitzing, yeah you’re going to get to Carson and you hope he throws a pick and fumbles, but he’s also going to put two or three deep downfield against you, and in a close game, you don’t want that. What I think Jonathan Gannon would love to do is show a lot of pressure and then back off at the last second and hope the four-man rush wins more consistently.”

Caplan: “I’m interested to see what his approach is going to be, because Gannon threw the house at them (Minnesota). He should be aggressive. If they don’t blitz, I don’t know if they can win anymore. (Josh) Sweat is a good pass rusher and he’s so long, but he doesn’t seem to win consistently unless they play a Wide 9.”

Caplan: “I’m going to trust this team and I’m going to pick the Eagles to win on the road. I have it 27-20 Eagles over Washington. I just feel like Gannon will have a good gameplan.”

Mosher: “I have the Eagles winning 33-26, up by double digits, but then Washington is going to do their thing where they are going to have to put the ball in the air a lot late and probably come away with one or two (scores) at the end there.”