On the heels of a thrilling opening week of football, Week 2 proved to be no exception, delivering an amalgamation of high-scoring affairs, unlikely upsets, and gutsy victories.

As a result, this typically influences fantasy owners across the globe to reconcile their overreactions by scouring the waiver wire in search of reinforcements for their roster deficiencies.

Let’s explore some key roster maneuvers to heed ahead of Week 3: 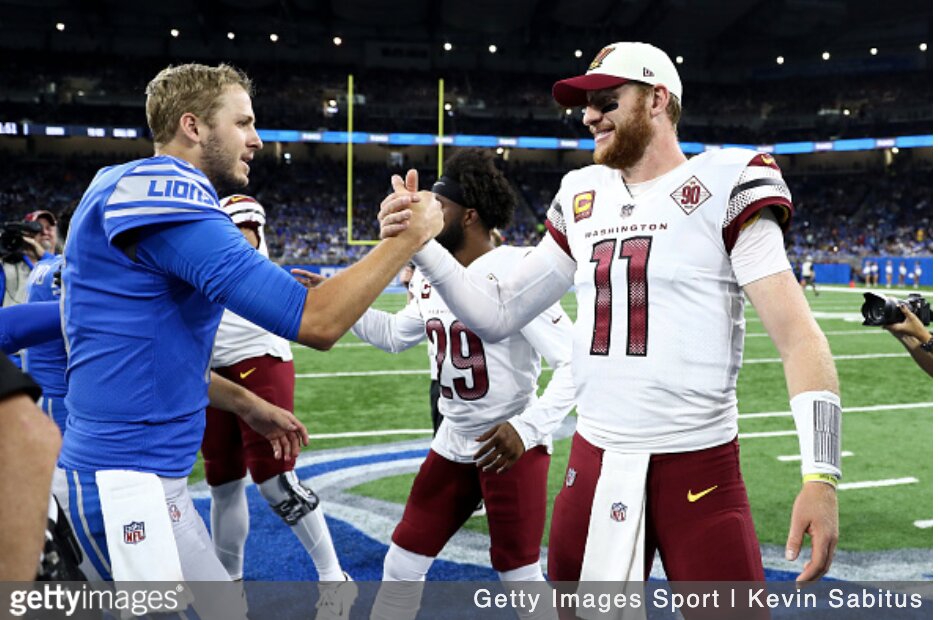 QB Jared Goff, Detroit Lions: Goff, coming off a four-touchdown performance in a shootout against the Washington Commanders, squares off against a vulnerable Vikings pass defense that just surrendered 333 passing yards to the Eagles on Monday night. This new-look Lions team has embodied the tough-minded, attack-style nature of its head coach, and I’d expect them to strike early and often against an exploited Vikings team coming off a short week.

RB Darrel Williams, Arizona Cardinals: While James Conner’s status for Sunday remains up in the air due to an ankle injury sustained in a gutsy win over the Las Vegas Raiders, Williams is primed to assume the lion’s share of carries. In relief, Williams carried eight times for 59 yards and a touchdown. Williams isn’t much of a factor in the passing game, however, and those in PPR formats should keep an eye on Williams’ potential running mate this week, Eno Benjamin. Monitor Conner’s progress throughout the rest of the week, but Williams would have flex appeal against the Los Angeles Rams on volume alone.

RB Raheem Mostert, Miami Dolphins: After carrying the ball just five times for 16 yards in the opener, Raheem Mostert was rendered a non-entity by many in the fantasy community. Last Sunday told a different story, as Mostert led all Dolphins running backs in snaps (39), carries (11), and yards (51). The electrifying speedster also factors into the equation as a receiver out of the backfield, where he secured three receptions for 28 yards on three targets. Given how explosive the Dolphins looked against the Ravens there figures to be plenty owners rushing to the waiver wire in hopes of acquiring a piece of Miami’s white-hot offense. If you happen to score Mostert via waivers, the best course of action would be to stow him on your bench this week to see whether last week was a mirage or harbinger.

RB Brian Robinson, Washington Commanders: Robinson, who sustained gunshot wounds in an attempted robbery last month, is listed here as a preemptive pickup, as the rookie running back is eligible to make his return to the Commanders lineup in Week 5.

WR Garrett Wilson, New York Jets: Despite yielding eight targets in his NFL debut, Wilson compiled a relatively pedestrian stat line, hardly foreshadowing the Week 2 breakthrough in which the 2022 first-round pick reeled in eight receptions for 102 yards and two touchdowns on a whopping 14 targets. Though it remains to be seen how quickly Wilson establishes a rapport with quarterback Zach Wilson – whose return is imminent – Garrett Wilson’s early emergence suggests he’s here to stay. The former Buckeye standout should be the No. 1 waiver priority this week.

WR Jakobi Meyers, New England Patriots: Meyers doesn’t find the end zone often, but the volume-based slot receiver has become the focus of the Patriots’ aerial attack, hauling in 13-of-19 pass targets for 150 yards through the first two weeks. PPR enthusiasts are sure to be familiar with Meyers at this point, but the NC State product provides a weekly safe floor as a flex play in essentially every format.

RB Tyler Allgeier, Atlanta Falcons: With veteran Damien Williams (ribs) on injured reserve, Allgeier saw his first NFL action Sunday against the Rams, carrying 10 times for 30 yards. While converted running back Cordarrelle Patterson remains the de facto lead back, he and Allgeier shouldered the same number of carries (10), so Allgeier must be monitored in the event that the big-bodied battering ram seizes control of the backfield.

WR Greg Dortch, Arizona Cardinals: With Rondale Moore still on the mend, the multidimensional Dortch has flourished in a similar role, accumulating (16 targets) 14 receptions for 133 receiving yards and a touchdown through two weeks. It’s unclear how long Dortch will enjoy his long-awaited moment in the sun before Moore’s inevitable return, but the former Wake Forest star should absolutely be rostered, at least in deeper leagues, where he could confidently be deployed as a flex.

RB Damien Harris, New England Patriots: Harris appeared to be shaken up at the end of the game last week, so his status should be monitored, but if he’s full-go, he deserves flex consideration after compiling 71 yards and a touchdown on 15 carries. He also caught a pair of passes for 16 yards. Though Harris was out-snapped by Rhamondre Stevenson 42-27, the former garnered six more carries and appears to be the preferred option in terms of fantasy production.

RB Tony Pollard, Dallas Cowboys: Zeke Elliott still has a stranglehold on the snap share (41-24), but Pollard’s consistent productivity lends itself to increased opportunities. Against the Bengals, Pollard carried the ball nine times for 43 yards and a touchdown and finished second on the Cowboys in pass targets (7), bringing in four for 55 yards. If you are mulling flex options, make sure Pollard is in the conversation in a prime-time matchup with the Giants.

WR Drake London, Atlanta Falcons: The physically imposing London is a go-up-and-get it wide receiver who plays with an above-the-rim mindset, making him an extremely quarterback-friendly receiving option. So far, the former USC standout has parlayed 19 pass targets into 13 receptions for 160 yards and a touchdown. London, the Falcons’ top target, will have a chance to feast against Seattle’s secondary on Sunday.

WR Brandon Aiyuk, San Francisco 49ers: The explosive Aiyuk, who has generated 11 targets the past two weeks, should be among the most prominent beneficiaries of Jimmy Garoppolo’s reinsertion into the starting lineup. If you encounter an owner who has grown frustrated with Aiyuk’s lack of production, buy low while you can.

WR Elijah Moore, New York Jets: Moore’s sophomore campaign is off to a relatively quiet start but he faces a Bengals secondary that allowed Dallas Cowboys backup quarterback Cooper Rush to pass for 235 yards and a touchdown in a 20-17 upset. Moore is averaging six targets over a two-game sample size, and the added attention commanded by Garrett Wilson should create a more substantial role.