In Slay He Trusts

Jalen Hurts’ progression as a passer and a much-improved defense were the main takeaways from the Philadelphia Eagles’ 24-7 victory over the Minnesota Vikings on Monday night at the Linc.

The fine details behind these are found in the film. 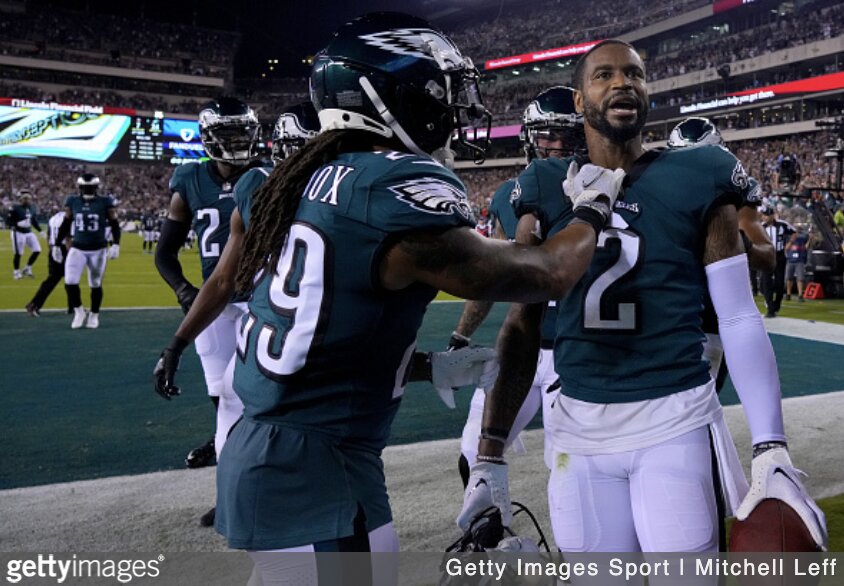 Darius Slay’s interception and lockdown coverage on Justin Jefferson powered an Eagles 24-7 win against the Vikings.

On the latest episode of the Inside The Birds podcast, Adam Caplan and Geoff Mosher broke down Monday night’s matchup with the help of intel from personnel sources who watched the tape.

Geoff Mosher: “I spoke to someone who, specifically regarding Hurts, his comment was interesting. He said for a guy who is still improving and working hard on the processing part of the game, even when he has been not at his best as a processor, he never puts the ball in harm’s way very much. For the most part, he’s very careful with the football. The person who I was talking to said you’re sort of ahead of the game if you’re not there as a processor but you’re not making bad decisions, because they often go hand in hand. He has never made an abundance of risky throws and you saw against the Vikings a really good concept of what he wanted to do based on what the defense was giving…He stayed in the pocket more so and that enabled him to make some good downfield throws, even against deep coverages.”

Adam Caplan: “Here’s the way it was explained to me: He rolled his shoulder very well, got his feet set, followed through, finished well…The [Dallas] Goedert throw in the first half is about as good a throw as you’re going to make. His accuracy is way up, he’s getting cleaner looks. Here’s the thing we need to understand: This is his second full year in the system, second full year as a starter. The timing is better.”

Mosher: “There was a second-and-16 where Jalen did a really nice job of staying in the pocket and he hit Quez Watkins on the right side for 18 yards. What I thought was interesting about that was, despite the Vikings best attempt to play two deep safeties and back their corners off, there was enough time for Watkins to run that straight line up and then he put a move to the outside on Patrick Peterson, turned him to the outside and then broke inside. It was a really nice part of that timing we were talking about where Jalen sees him about to break and throws it so that when he turns around, it’s there. That was done two or three times.”

Mosher: “The Eagles absolutely did their job up front. I don’t think you’re going to see a whole lot of teams moving forward just play coverage and try to get a four-man rush against the Eagles because they’re just too good up front.”

Caplan: “I think what happened in the first game was communication, being in Detroit, a shocking sellout at Ford Field, they just didn’t handle it well overall. This game, they gave up some pressures from Danielle Hunter, but Hurts defeated it…”

Mosher: “To me he did two things that were really significant in this game: One is that he situationally blitzed. He didn’t throw 30 at them, but he threw a variety of pressure schemes at the right time. And two: he allowed his corners, not every snap but enough, to challenge the receivers at the line of scrimmage. I think that was the biggest adjustment. The blitzes were great, too, but Kirk Cousins has seen a million blitzes. Challenging from the corners when you have guys like (Darius) Slay, (Avonte) Maddox, and (James) Bradberry who can challenge and be strong, I thought that was a big step forward.”

Caplan: “We talked to a league source who knows him and he said Philly’s going to be more aggressive this year because he’s got better talent. You’ll see him disguise more, which has happened more, but the Double A-Gap blitzes. He trusts these guys now because he’s got players who are pretty talented and he’s not asking them things they can’t do.”

Mosher: “He’s their best linebacker. He’s a playmaker now. Two passes batted down, they’re throwing on him in man and he’s doing a good job, he’s getting sticky. This is a guy who never will test great to make you think he can play that way, but his play speed is there…He’s a smart player and he’s a tough player and it’s working right now.”

Caplan: “The fact that he’s gotten so much better in coverage, I know he’s very smart and distinctive, but this is almost hard to believe. The only reason (Nakobe) Dean is not getting on the field is because of Edwards and his progression. That’s actually a good thing.”

Mosher: “When they (Minnesota) did run in the first half, you did not see combo blocks driving Fletcher Cox 10 yards away from the ball, you did not see tight ends putting wham blocks on (Javon) Hargrave that just completely knocked him out like you saw against the Lions. They certainly played with effort and intensity. You can call it alignment, but you have to beat the guy in front of you. They did not get beaten by the guy in front of them the way they did last week.”

Caplan: “Great energy from (Fletcher) Cox, he was engaged in this game. He clearly was motivated. Hargrave rebounded, he blew some run plays up. Cox, the numbers don’t show it but the tape does, it was like night and day from the Detroit game. They used Sweat as a defensive tackle. As a force defender, he did a great job pushing stuff inside.”