ITB Eagles vs. Vikings Pre: Birds Will Need Another Weapon To Shine

The Philadelphia Eagles are looking to improve upon their opening-week victory over the Detroit Lions.

Next up is another NFC North opponent: the Minnesota Vikings, this time at Lincoln Financial Field on Monday night.

On the latest edition of the Inside The Birds podcast, Adam Caplan and Geoff Mosher broke down the Vikings and gave game predictions. 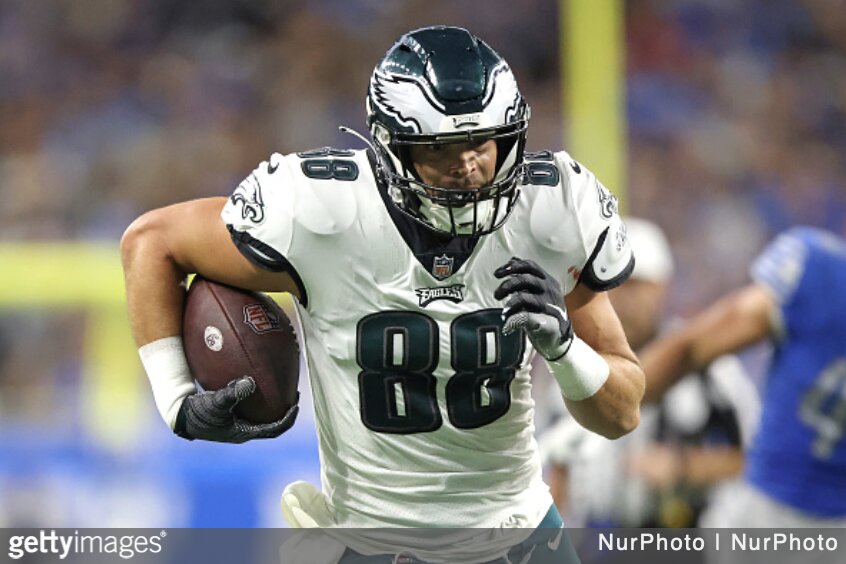 More targets might be on the way for Dallas Goedert if the Vikings double AJ Brown.

Geoff Mosher: “I would be very surprised if the Vikings pressure Jalen Hurts the same way the Detroit Lions did. I do suspect that they will try to pressure him, try to get him going to his left, but I would think they are going to make him pick apart coverages more than picking apart blitzes.”

Adam Caplan: “[Vic] Fangio’s (system) doesn’t blitz, that’s his deal. They went with post-snap disguise, make the quarterback hold on, and that’s how they get pressure. I don’t see a lot of blitzing unless they take a page out of what Detroit did. It gave the Eagles offensive line a lot of problems.”

Mosher: “Because they’re not going to blitz nearly as much as the Lions, I also think you won’t see A.J. Brown single-covered, manned up by any of these guys nearly as much as you saw in the Lions game…I don’t think you’re going to see that kind of coverage and risk that the Lions took from the Vikings. You’re going to have to see – if the Eagles want to move the ball – Devonta Smith and/or Dallas Goedert be more involved in the passing game.”

Caplan: “[Patrick] Peterson is the guy I’m going after all night. [Cam] Dantzler doesn’t run well, he’s just really tall. I’d still rather go against Peterson because he’s an older corner…I’m going after these corners, that’s where your bread and butter is going to be, that’s how they’re going to win this game: throwing it and also getting Goedert involved. And Quez Watkins, why not him too?”

Caplan: “They’re facing one of the youngest offensive lines in the NFL. Bradbury has not worked out as a first-round pick. He’s undersized, he has underachieved. [Christian] Darrisaw is going to be a stud at left tackle, Brian O’Neill has been a great story, a former tight end. They’re young, they’re talented, but here’s what someone told me, this guy played in the league. He said here’s the issue with this offensive line: They’re very young. Young lines have trouble communicating in hostile environments when they’re not at home. What [Jonathan] Gannon should do is definitely disguise way more than he did last week and make it not only hard on [Kirk] Cousins, but make it hard for that line. You want to take advantage of Philly being home.”

Mosher: “If I’m Kevin O’Connell, and I know that my line is talented but young and we’re on the road in a hostile environment and I just watched a team steamroll the Eagles for over 180 rushing yards, if he doesn’t at least come out and try to run the ball heavily on the first series to use a strength against what looked bad for the Eagles, he’s an idiot if he doesn’t try to do that. You’ve got Dalvin Cook and you’re trying to take pressure off of your line with the silent count and your quarterback to hear everything, run the ball and see if it works.”

Caplan: “I’m doubling Jefferson. He is so smooth and incredible. He’s still got that chip on his shoulder, not just because the Eagles passed on, but he was the last guy in the recruiting class for LSU in his freshman year. They’re going to be challenged here. The Eagles defense collapsed in the second half after a pretty good first half outside of that first drive.”

Mosher: “If they double Jefferson, meaning slide a safety in that direction, bracket, if they’re playing zone you have the linebacker drop into the area where you think based on the route Jefferson is going to be, that leaves Adam Thielen and Irv Smith Jr.”

Mosher: “I have the Vikings winning 26-23 in this game. I just don’t have trust that the Eagles defense is going to be cured in one week.”