ITB: Kelce Expected To Be Ready For Week 1

The Philadelphia Eagles are set to take the field for the first preseason game against the New York Jets on Friday at the NovaCare Complex.

While head coach Nick Sirianni said he plans to briefly play starters, it will mainly be backups in the spotlight as they push to make the 53-man roster.

On the latest edition of the Inside the Birds podcast, Adam Caplan and Geoff Mosher talk about the latest developments and give names to watch during the preseason. 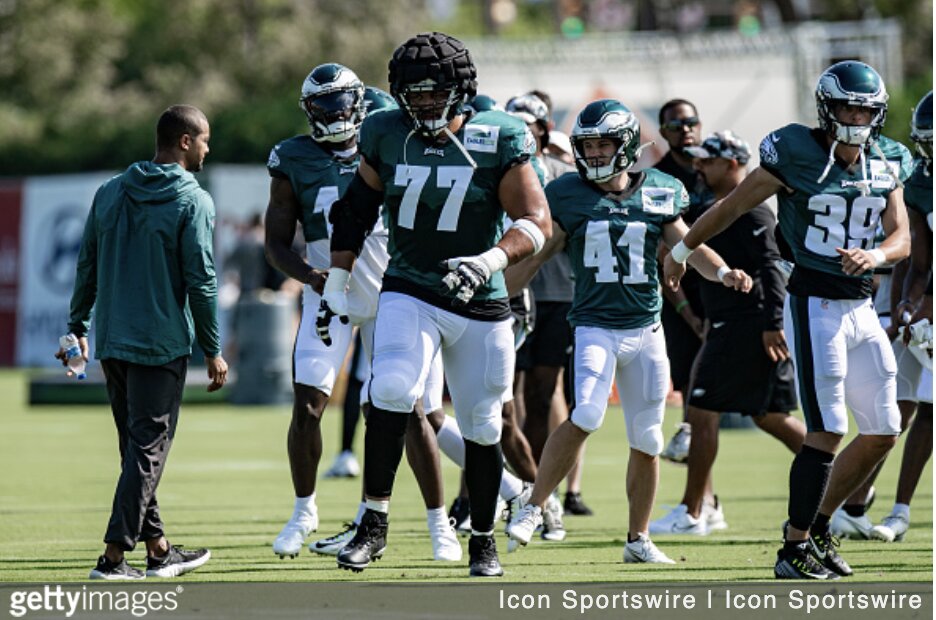 Several Eagles will get their first taste of NFL action Friday in the preseason opener.

Adam Caplan: “From our information, we are told that he will play Week 1 at the Lions. Remember, he wore the sleeve on that elbow last year. My understanding is it’s the same elbow. The timeframe for recovery is about three weeks. He would have to have a setback with the rehab to not play in Week 1, as I understand. Now, it doesn’t mean that he’s not going to be in pain. This is surgery on his elbow…Let’s say somehow, he was going to try to play in Week 1 without getting it fixed, it could have been worse. He did the smart thing getting it taken care of now. We’re going to see a lot of Cam Jurgens, obviously in practice and some in the game.”

Geoff Mosher: “This is not a good area for the Eagles. One of the concerns they have with this is group is playing teams with a lot of speed that can attack you not just from the perimeter but also from the interior. The Eagles just don’t have a lot of guys that can run other than Marcus Epps at this position.”

Caplan: “What I’ve heard on Epps is they just want to see him to do it full time. You’ve now shown you can practice at a good level, they like the player. Now you’re a full time starter, you’re not getting rotated. Let’s see what you do.”

Mosher: “You heard Nick Sirianni say the starters will play a series or two for the first preseason game. If you go and look at the starting offense and defense, you’ll notice that they’re already playing without several starters to begin with. I’m not sure if [Jordan] Mailata’s going to start at left tackle just a few days back from concussion, we know Jason Kelce is not starting at center, we know that Devonta Smith is very unlikely to be playing because he’s been out for a while with a groin injury, we know that [Kenny] Gainwell has been out with an injury…When he says the starters are playing, already 40-45 percent are hurt and are probably not even going to dress for the game.”

Caplan: “Reid Sinnett’s got some pop in his arm. I want to see him get protected and show off that arm that we saw in training camp.”

Caplan: “Back in the 2017 preseason, whenever the Eagles traded Jordan Matthews, the Bills wanted to see that he was healthy on tape, so they played him that game, showed he was healthy and got traded. So here, if your team has interest in Reagor, you’re going to want to see his tape. If I’m the Eagles, I’m playing him at least a quarter if not a half.”

Mosher: “They listed Jalen Reagor on the unofficial depth chart as both the punt and kick returner. They probably should have him do both and really showcase him. He’s been very consistent in camp this year. It’s his best camp by far. This camp he’s been less of a flash player and more of a good looking wide receiver. If the team is smart, and from Jalen Reagor’s standpoint too, if they don’t have him in their plans and they can get a good enough deal that they would be happy with, they shouldn’t wait (until) the second or third preseason game. Don’t keep putting the kid out there and risking his health in a preseason game just because you want to wait until the end. I think it would be smart to showcase him for a game, maybe a second game, and that’s it.”

Mosher: “Tuipuloto is going to be a good person to look at, because you’re probably going to see him play head up on the center like Jordan Davis would, and you’ll probably see him move around.”

Caplan: “He’s had a really good camp. He’s now what we call in the conversation to make the team. Let’s see what happens to Tuipuloto over the next three games. He came into camp in really good shape.”

They Can Go For Miles

In their toughest challenge of the season, the Philadelphia Eagles overcame pouring rain, injuries, and an early 14-0 deficit to defeat the Jacksonville Jaguars, 29-21, and remain undefeated. On the Inside The Birds Week 4 Postgame Show, Adam Caplan and Geoff Mosher were joined by Eagles Hall of Fame offensive tackle Tra Thomas to break…

WRs, DBs Will Make Difference In Birds Vs. Jags

Scott, Maddox Out Vs. Jags