To complement Thursday’s list of offensive “legends“, I’ve compiled my list of relatively obscure defensive players who remain part of training camp lore – for one reason or another.

Coming off a CFL-leading 16-sack season in 2010, Hunt began generating considerable buzz among NFL circles before ultimately agreeing to a three-year contract. An undersized edge rusher at just 6-foot-2, 248 pounds, Hunt’s lightning-quick get off and savvy use of leverage would routinely place opposing tackles on proverbial skates. The former Houston Cougar entered training camp as a long shot but emerged among the clear-cut winners by the time the preseason commenced. Hunt ended up sticking on the Eagles’ 53-man roster as a rotational pass rusher for two seasons before an ACL injury landed him on injured reserve before the start of 2013  — in a contract year. In his 22 games as an Eagle, Hunt notched 16 tackles (three for loss), three sacks, and five quarterback hits.

A second-round pick of the Seattle Seahawks in 2006, Tapp landed with the Eagles in March of 2010, as part of a trade that sent fellow defensive end Chris Clemons and a 2010 fourth-round pick to Seattle. Tapp appeared in 39 games (three starts) in his three seasons with the Eagles, registering 71 tackles (16 for loss), six sacks, and eighteen quarterback hits. The former Virginia Tech defender, now an assistant defensive line coach with the San Francisco 49ers, was part of a defensive end rotation that also included Trent Cole, Brandon Graham, and Juqua Parker. 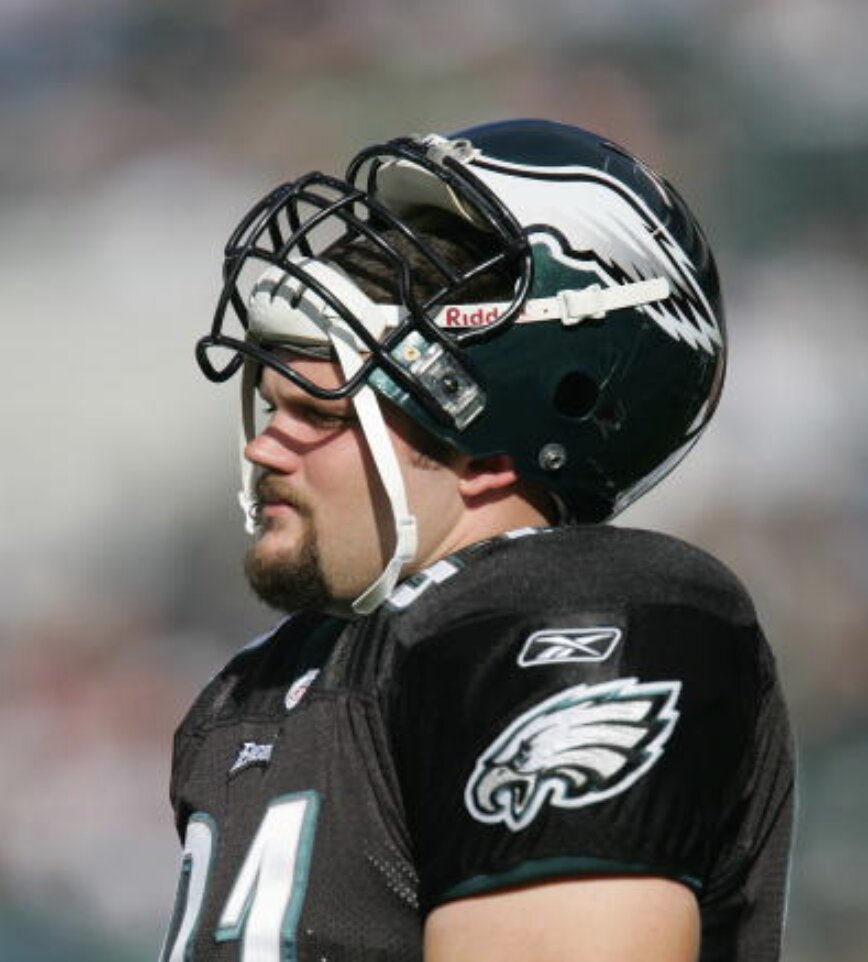 DT Sam Rayburn was one of several 2003 rookie free agents who made the 53.

The Eagles hit a home run with its 2003 crop of undrafted free agents, which included Greg Lewis, Reno Mahe, Quintin Mikell, Alonzo Ephraim, Rod Hood, and Rayburn. Rayburn, a 6-foot-3, 303-pound interior mauler, showcased superhuman strength, leverage, and relentless motor at every turn to emerge from the depths of the roster and survive cutdown day. Branded with the nickname “Truck Driver” by teammate Derrick Burgess, Rayburn lasted four seasons in the NFL – all with the Eagles – accumulating 86 tackles (15 for loss), nine sacks, two forced fumbles, and fumble recovery in 53 games (four starts).

The Eagles selected Laws, coming off a career season for Notre Dame in which he compiled 112 tackles and four sacks, with the No. 47 pick in the 2008 NFL Draft – two spots above DeSean Jackson. Laws, who was expected to complement Broderick Bunkley and Mike Patterson along the interior, failed to make an impact in Philadelphia despite being afforded every opportunity in his four seasons. Like clockwork, Laws flashed each summer at Lehigh, inspiring optimism that maybe he’d turned the corner. The eagerly awaited breakthrough never materialized, however, and Laws’ short-lived NFL career last just four seasons. He finished with 57 tackles (12 for loss), five sacks, and 11 quarterback hits across 56 games (two starts).

The Eagles signed Labinjo in 2004 as an undrafted free agent. While the former Michigan State defender didn’t make the 53-man roster out of camp, he went on to appear in three games as a rookie – including in Super Bowl XXXIX – amassing 12 in three games. Labinjo made the team outright the following season as the backup middle linebacker behind Jeremiah Trotter and unexpectedly made his first – and only – NFL start in the season-opener in Atlanta, following Trotter’s pregame ejection. The Eagles ultimately cut ties with Labinjo during the season, but he went on to appear in two games with the Colts that season and spent 2006 with the Miami Dolphins, playing behind All-Pro Zach Thomas. Labinjo’s 2007 reunion tour with the Colts lasted all of two months before he was again rendered obsolete, and he never played another NFL down. The Toronto native spent the remainder of his professional career with the Calgary Stampeders of the CFL. Sadly, on Sept. 21, 2018, Labinjo passed away in his sleep at the age of 38. 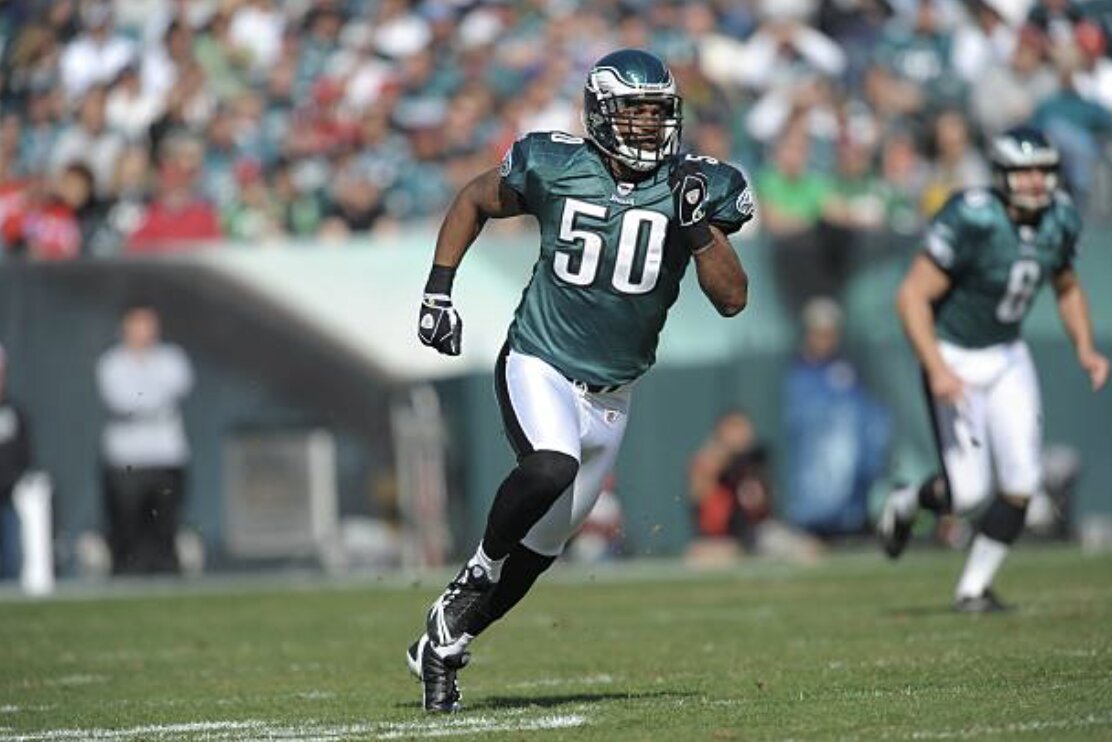 LB Tank Daniels was promoted from the practice squad in 2006 and in 2007 helped the Giants win a Super Bowl.

Signed as an undrafted free agent out of Harding University in 2006, Daniels turned enough heads in training camp to earn an elusive spot on the practice squad as a rookie, before garnering a late-season promotion to the 53-man roster. Daniels appeared in the team’s final six games and became an immediate third-phase contributor, yielding five tackles over that span. While Daniels was again omitted from the Eagles’ 53-man roster to start 2007, he found employment with the rival New York Giants. The 2008 season marked Daniels’ second stint in Philadelphia, and the 6-foot-3, 248-pound linebacker appeared in all 16 games as a key contributor in all aspects of special teams and collected a career-high 14 tackles.

The Lehigh faithful probably have to reach deep into the memory bank to remember Richmond, who 18 years ago was an undrafted free agent linebacker the Eagles were optimistic about due to his multifaceted skillset (he also played defensive end at Oklahoma State) and projected upside. A 2003 first-team All-Big 12 performer at Oklahoma State, it’s arguable the 6-foot-1, 235-pound Richmond had the inside track to one of the final roster spots before a knee injured sustained in the preseason opener derailed any chance he might have had. Richmond spent the 2004 season on the Eagles’ practice squad and missed the entirety of the 2005 campaign after undergoing surgery to repair a herniated disk. When training camp wrapped in 2006, Richmond was waived/injured, which ultimately ended his dream of playing professionally. He now serves as the defensive line coach at Oklahoma State. 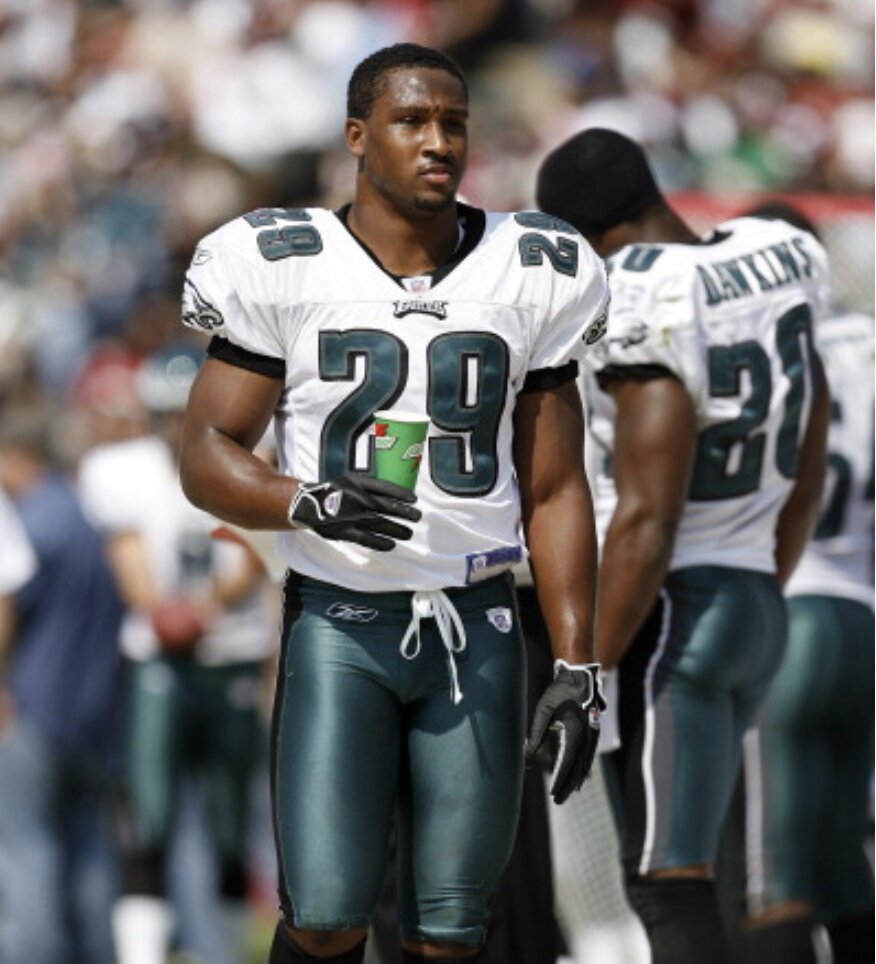 CB Rod Hood is one of the most successful undrafted signings in team history. He played eight NFL seasons.

Hood’s instinctiveness and astute football intellect enabled him to quickly made his presence known on the Goodman Campus practice fields in the summer of 2003 as an undrafted free agent, performing adequately enough in limited opportunities to join a cornerback contingent that included Troy Vincent, Bobby Taylor, Lito Sheppard and Sheldon Brown. For a brief period, Hood morphed into one of the better third corners in the NFL, and in his four season with the Eagles, the former Auburn defensive back tallied 122 tackles (three for loss), five interceptions, 28 passes defended, five fumble recoveries, and a forced fumble in 56 games (13 starts). Hood signed with the Arizona Cardinals for the 2007 season, where he became a full-time starter for two seasons. He played his final NFL season in 2011 with the St. Louis Rams, where he appeared in nine games (four starts). All told, Hood has proven to be one of the savviest undrafted signings in team history.

With his hulking 6-foot-3, 218-pound frame and prestigious Pac-12 pedigree – including his third-round draft status in 2004 – expectations were high for Matt Ware as a rookie. Ware, who played on both sides of the ball at UCLA, was expected to provide size, athleticism, and versatility to a secondary that featured ascending talents such as Lito Sheppard, Sheldon Brown, Michael Lewis, Rod Hood, and Quintin Mikell. Ware never seemed to find his footing and always appeared overmatched. His greatest contribution as an Eagle came in 2005 against the Chargers, when he scooped up a blocked field goal by Mikell and scampered into the end zone for the game-sealing touchdown. Ware never started a game for Philadelphia over his two seasons, and the former third-round pick never amounted to much more than a sub-package defender with special teams upside for the Cardinals, where he spent the remainder of his seven season in the NFL.

When Ikegwuonu fell to the Eagles in the fourth-round of the 2008 NFL Draft, it was widely viewed as a steal. To the overly optimistic, it was only a matter of time before Ikegwuonu seized a starting role. Despite missing the duration of his rookie season due to a knee injury sustained at the NFL Combine, Ikegwuonu returned to Lehigh healthy and primed to earn a roster spot. However, the former Wisconsin defensive back was among the final wave of cuts ahead of the 2009 regular season. With a number shortage at cornerback, Ikegwuonu was promoted from the Eagles’ practice squad ahead of the team’s Nov. 22 matchup with the Chicago Bears and was waived two days later and never again appeared in an NFL game.

Before joining the Eagles for training camp in 2002, Hart toiled in the af2 – the developmental league for Arena Football League – as a member of the Tallahassee Thunder and later with the AFL’s Tampa Bay Storm, where he doubled as a defensive back and wide receiver. Upon signing with the Eagles, Hart was allocated to NFL Europe, where he cut his teeth as a member of the Rhein Fire and Amsterdam Admirals. By the summer of 2003, Hart had built upon his NFL Europe and practice squad experience and soon emerged as a legitimate frontrunner for a roster spot behind Brian Dawkins. Hart not only made the 53-man roster out of camp, he started nine games at free safety in place of an injured Brian Dawkins, accumulating 57 tackles (two for loss), five passes defended, and a sack. Hart signed with the San Diego Chargers the following season, where he appeared in 76 games (36 starts) over five seasons.

Before cutting the back of his knee and damaging the peroneal nerve in his left foot hopping a fence while chasing his dog during the 2005 offseason, Reed was expected to factor prominently into the plans of defensive coordinator Jim Johnson and special teams coordinator John Harbaugh. The South Florida product had just come off of a rookie season that yielded 24 tackles and a pass defended in 14 games (one start) and 761 yards on 33 kick returns, and suddenly, Reed saw his career hanging in the balance. Reed had an opportunity to rewrite history in his second go-round with Philadelphia in 2007, and it was evident that he approached every play as though it could be his last. Reed’s second, and final, tenure with the Eagles lasted one and a half seasons, racking up 44 tackles (three for loss) and three passes defended while adding 701 yards on 31 kick returns across 20 games (three starts). 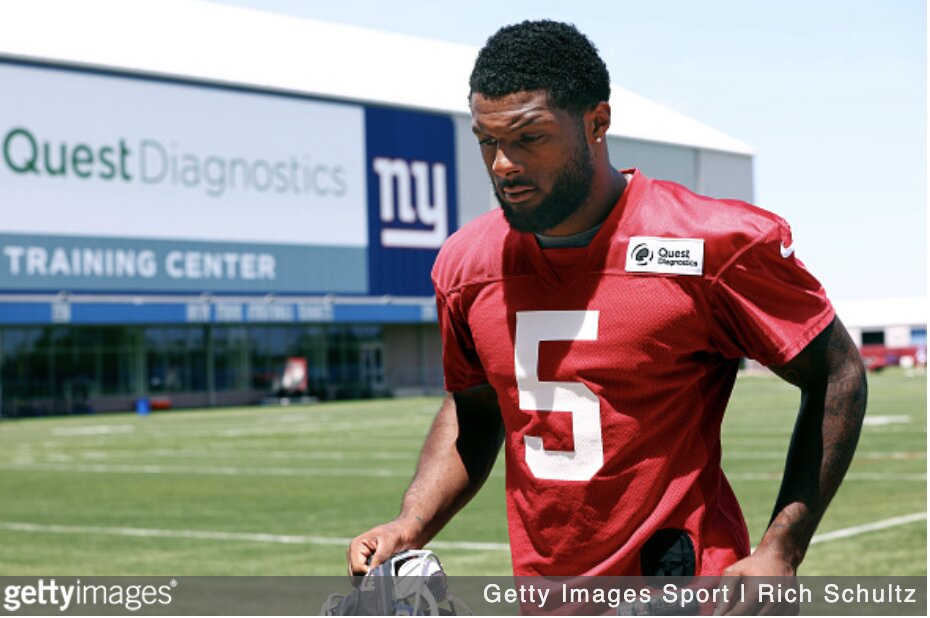