Entering training camp at the end of the month, the Philadelphia Eagles are filled with talent on both sides of the ball.

It remains to be seen, however, how effectively this team will be able to utilize its talent.

On the latest edition of the Inside the Birds podcast, Adam Caplan and Geoff Mosher answer questions about expectations for players, schemes, and more. 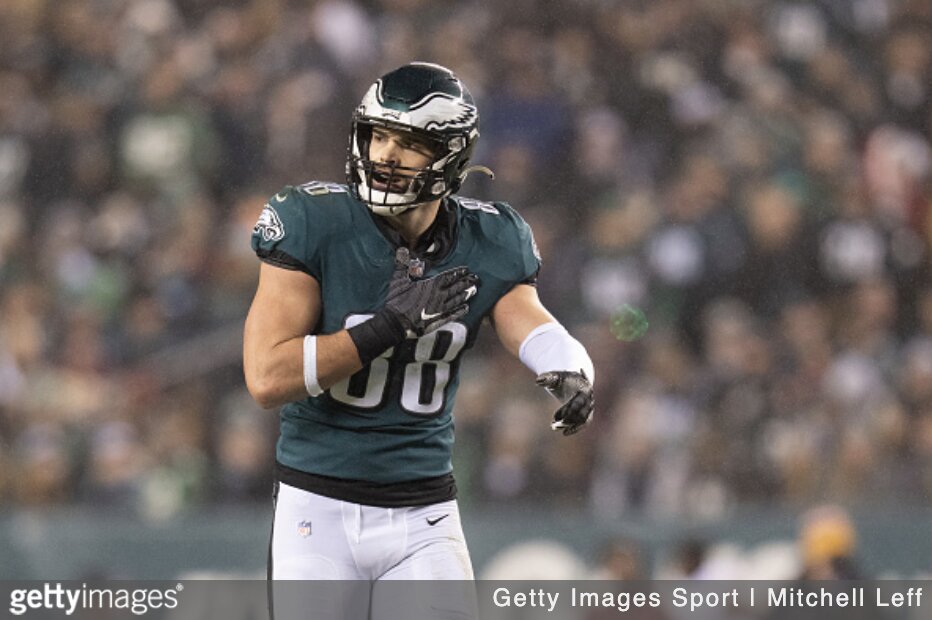 Eagles TE Dallas Goedert is poised to see more targets and be even more productive in 2022.

Adam Caplan: “The pass target ratio will be AJ Brown number one. Two will be Devonta Smith, three will be Goedert. There will be games – because he does not have to deal with Zach Ertz anymore – where [Goedert] can own the middle of the field. We saw that against the Jets and Washington [last season] back-to-back where he dominated targets and dominated big plays. He is a guy who is a very tough matchup because he is big and athletic.”

Geoff Mosher: “Dallas had 76 targets in 15 games [in 2021]. That’s about five targets a game. That sounds low, but you have to remember the Eagles were a run-first offense and Dallas Goedert also was not the number one tight end on the team for the first six weeks of the season. I believe, just by virtue of being the number one target at tight end and what we expect to be a more passing offense in year two, that five per game is more liable to jump to the six-to-eight receptions per game realm for him.”

Caplan: “To even extend him, he has to play well. He didn’t show that he was ready to take that big step yet, but he’s capable of doing it with coaching and changing up his mechanics a little bit. If that happens this summer, you are probably going to see a big jump from him. If he plays well enough, their history is they extend players early.”

Mosher: “I think that they looked at what happened with the Cowboys and Dak Prescott, where they waited and then had to sign him for the highest possible dollar and a year later, they had to get rid of Amari Cooper. The Eagles pride themselves on being able to extend guys early enough so that their cap number isn’t as exorbitant compared to other players at their position and they understand that every once in a while, there’s going to be a deal that backfires. That’s just part of the risk of business, but you don’t let the one outlier impact what has generally been a good philosophy for years.”

Caplan: “I don’t know if you can say as a rookie he’ll do it, but you watch, Nakobe Dean will be one of the defensive leaders. We know he is very smart intellectually, but that doesn’t make you a leader. You need vocal leadership, lead by example of course, doing the right things on and off the field, his play style which his very physical. Kirby Smart, we heard, thought he was one of the best players he ever coached. This guy is a stud.”

Mosher: “I do believe Jonathan Gannon is going to try to do a lot of what he did last year and it seems he has more pieces to fit that…I am very curious to see what they are doing with the outside edge player opposite of Haason Reddick.”

Caplan: “If you look at their personnel, they now have scheme versatility. They can play any front they want…Last year, a lot of advanced pro personnel people for other teams just buried Gannon’s scheme. [They said it was] very vanilla, soft, doesn’t challenge.”

Mosher: “What their expectation of him three or four years down the road is that he doesn’t have to be just a zero (technique). He can be a three-technique type like Fletcher Cox because he can move. He’s got lateral movement. We know he’s not a finesse player and we know he’s not a great upfield player yet, but he could be, because he has all of the tools to be able to do it. He can be a 4-3 defensive tackle.”

Caplan: “There is a lot of gifts that he has. He’s explosive. The length is great. The athleticism is amazing for a guy as big as he is.”