[Editor’s Note: This is the first in a series of stories on InsideTheBirds.com recapping the Eagles offseason and looking to the 2022 season. Today’s story focuses on the most significant offseason addition to the team.]

Over the past few months, the Eagles have undertaken a seismic overhaul of their personnel, leading to palpable optimism surrounding this year’s team.

The draft night addition of Pro Bowl wideout A.J. Brown figures to invigorate a stagnant passing game with his explosive, run-after-catch ability and physicality while creating more single-coverage opportunities for second-year receiver DeVonta Smith, who should feast off those matchups.

The Eagles, who have never had two 1,000-yard receivers in the same season, conceivably have the quintessential tandem in place to rewrite history.

It would also be remiss of me to ignore the resources allocated towards fortifying a perpetually underwhelming linebacker room.

Hasson Reddick (Cardinals) and Kyzir White (Chargers) were pried away from their respective teams in free agency, while Georgia’s Nakobe Dean – perhaps the steal of the 2022 NFL Draft – inexplicably fell to the Eagles in the third round.

While Reddick significantly enhances the team’s pass rush, White and Dean provide athleticism, fluidity, and rangy at the second level.

The team even managed rectify its most glaring roster deficiency by landing a formidable running mate to Darius Slay, inking former Panthers and Giants cornerback James Bradberry to a one-year, $10 million deal.

But make no mistake, the prized offseason addition is poised to be 2022 first-rounder, Jordan Davis. 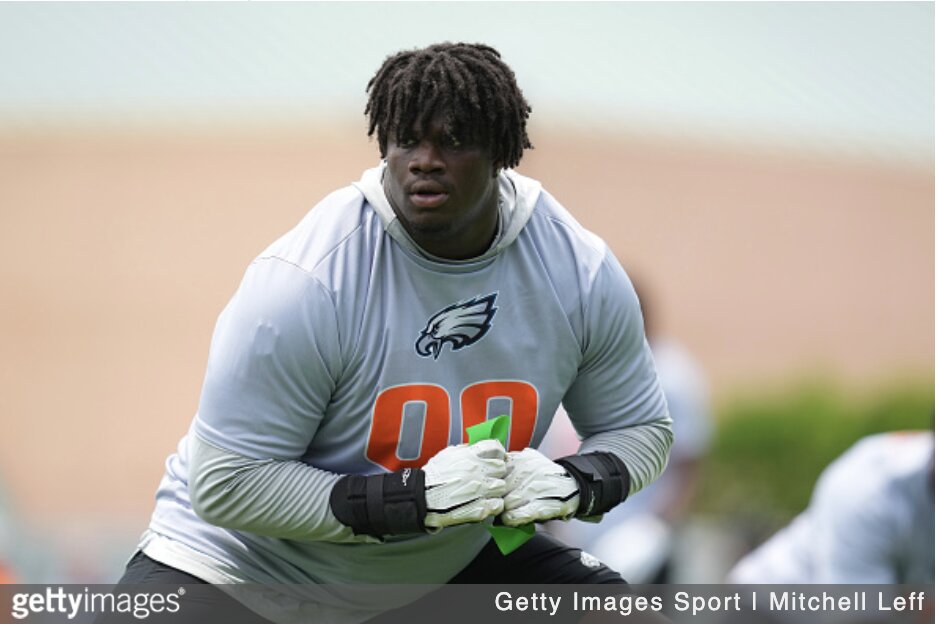 While the mountainous defensive tackle from Georgia is billed as an immoveable space-eater who occupies double teams and collapses pockets, the 6-foot-6, 340-pound former Georgia star enters the pro ranks with a less-than-stellar pedigree in rushing the passer, accumulating just 7.0 sacks over his four-year career in Athens.

However, glancing beyond Georgia’s wealth of surrounding talent of defense, you have to ask yourself: What was Davis asked to do?

Davis’ potential to develop into a pass-rusher is something the Eagles are banking on, as run-defending linemen rarely garner first-round consideration.

“And then there are going to be certain times where we let him cut his ears back and rush,” Eagles defensive coordinator Jonathan Gannon said last month. “At that place, obviously they play really good football there, they didn’t ask him to do that a lot.

“But he definitely has the skill set to do that when you start looking at how he moves and his body and his traits. He definitely will project to affect the game in the pass game, as well.”

If the Eagles can channel and mold Davis’ freakish intangibles – which include clocking an absurd 4.78 40-yard dash and showcasing a 32-inch vertical jump at the NFL Scouting Combine – they  might just have a perennial All Pro on their hands.

By simply deploying Davis on the field, the Eagles will draw double teams and force offenses to become one-dimensional.

If we take Gannon’s words at face value, Davis will have a role –  perhaps an early role –  in the passing game.

Even if Davis himself struggles to get home regularly, his knack for pushing the pocket and barricading the quarterback from stepping into throws will positively impact all three levels of the defense.

The Eagles’ undersized linebacking unit figures to be among the most immediate beneficiary, as Davis’ presence will keep them clean and free to roam sideline-to-sideline.

“He’s a big, explosive, violent man that can win 1-on-1,” Gannon said. “So, yes, he will definitely have a role in the passing game, and he will affect the quarterback in a good way. Excited about his skill set and what he can do in the run and pass game.”