“This Roster Can Compete”

With OTAs wrapped up, the Philadelphia Eagles now have more than a month to evaluate the tape from spring practice before training camp begins.

On the latest Inside the Birds podcast, Adam Caplan and Geoff Mosher report the latest intel from the completed offseason practices and break down the current state of the team. 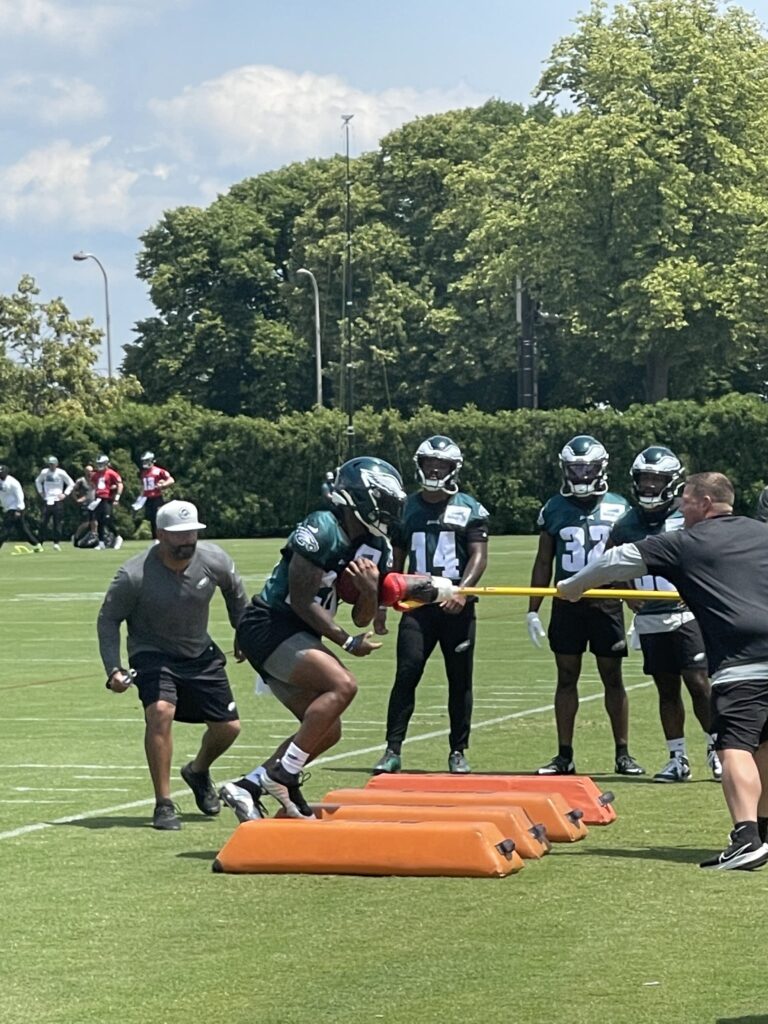 ITB photo: The Eagles are pleased with the overall state of their roster.

State of the Team

Geoff Mosher: “One thing you and I have both heard is that, as far as the state of the team, there’s some real positivity coming out– as far as this team and what’s it’s capable of.”

Adam Caplan: “They still have an issue at third cornerback, at safety, yet everywhere else they’re so much better… The feeling around the team versus last year at this point is night and day. They just think this roster can compete. They’ve got better depth. You look at the talent at wide receiver now, they’re deep. They’ve got versatility. Tight end, they feel a little bit better. Offensively and defensively, they just feel better about the depth and the front-line talent level.”

Caplan: “From what we understand, his understanding of the entire offense is way better…The good thing is he’s starting to not think as much [on the field] because it’s becoming more natural. His timing is way better.”

Mosher: “The big emphasis with Jalen is he doesn’t have to be Drew Brees for this to be a good team. Not every single throw has to be premeditated, spot-on and thrown with anticipation. He just has to improve in that area. He has great natural talents, like the ability to get out of the pocket and make plays.”

Caplan: “They need a guy with size. My sense is that they probably would bring someone in at some point in August if not by the start of camp. The problem with Jordan Howard is he has had neck issues, so you wonder about him. He’s always on call. If they need to sign him, they’ll sign him.”

Mosher: “Last year there was a lot more uncertainty, so they signed him early. I think they went into this offseason realizing they don’t need to sign him at all [before the season]. They are the only team ever since the Dolphins cut him who ever showed any interest in him. I feel like they know they can call him up five days before the season or the day after the cutdowns, and if they feel they need a big back, they can just bring him in.”

Caplan: “Zach Pascal is going to be the dirty work guy on third down. When they need a tough possession catch, he’s probably going to be that guy inside if [DeVonta] Smith and [A.J.] Brown are on the outside.”

Mosher: “I bet you he is a red-zone guy. He’s physical and he can block, too, so if you want to look like you’re going to pass but you want to pop a run there, he’s good to have out of your 11 personnel slot [receiver].”

Caplan: “He’s a little spark plug, a 5-8 slot receiver who has got punt return ability, which we saw in the OTA practice. Apparently, he’s been lighting it up. He seems to win on a lot of routes, but I really want to see it when the pads go on.”

Mosher: “I’m always skeptical of a little guy who wins in OTAs. It’s set up for those guys to win, those little, twitchy speed guys. But then the pads go on and you get to jam them a little bit and redirect them. If he can return punts, I would give him a better-than-average shot to make the team because it’s a need.”

Caplan: “The right guard position is new for Seumalo. The way we understand it, mentally he’s gotten it down so far but we’re not in pads and we’re not in training camp yet. We’ll see if he can stave off [Jack] Driscoll, but the way that it was explained to us is that Seumalo is so much stronger. The weight has nothing to do with it. It’s about technique and sheer power.”

Caplan “Our understanding is they are going to fluctuate between the 3-4 and the 4-3. They are going to be super multiple because of the personnel they have. They got Jordan Davis now. That gives them the ability to play the 3-4 front.… They got the versatility. They got guys who can stand up or play with their hand down.”

Mosher: “If they do play a 3-4, you take Josh Sweat and turn him from a down lineman to an outside linebacker, a stand-up guy, which if you’re just rushing the passer or setting the edge against the run, it’s not that big of a deal, but if you’re dropping into coverage, it is a bigger deal. Haason Reddick shouldn’t be dropping back into coverage, either. They are multiple, more versatile, they have more optionality, but they’re not necessarily perfectly aligned to play 3-4 a lot either.”

Caplan: “Reddick made his bread and butter in a 3-4 front. Talking to our Panthers source, he said the one thing they didn’t want Reddick to do is to ask him to cover. He’s just not comfortable with it. As our source said, he plays with his hair on fire. He just rushes the passer. He’s so explosive. The Eagles will not ask him to cover very much.”

Caplan: “He’s super physical and super smart. They’ve had some young linebackers who are smart, but he might be one of the smartest linebackers they’ve ever had. He picks up stuff very quickly. He’s tough, physical, instinctive.”