The Philadelphia Eagles have wrapped up their light OTA practice sessions and look toward training camp beginning July 26.

On the latest Inside the Birds podcast, Adam Caplan and Geoff Mosher, after being on hand to witness the final day of practice before training camp, discuss their observations and more. 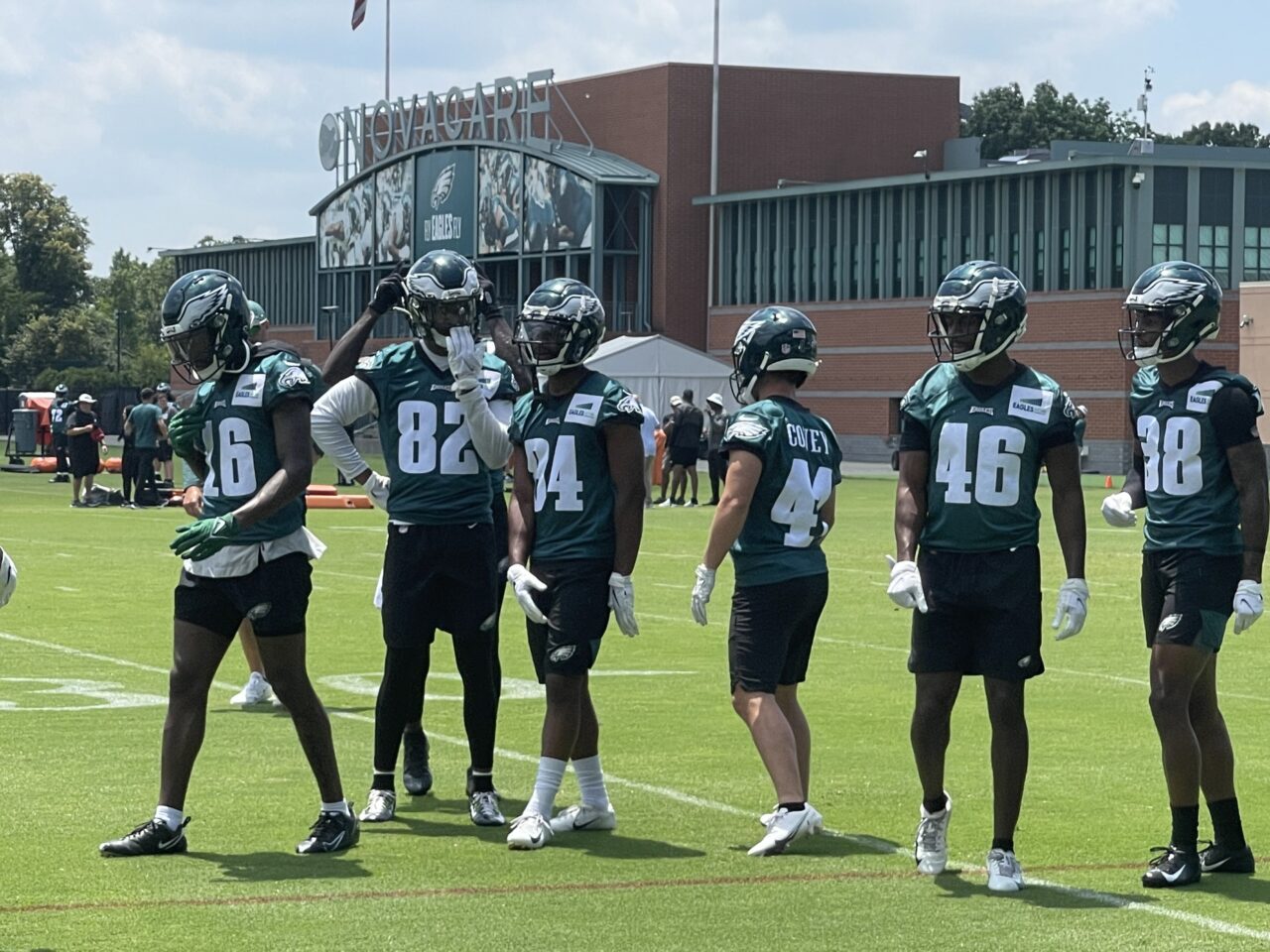 Mosher: “The first thing that stood out to me was who’s not there. No A.J. Brown, Devonta Smith, Lane Johnson, Jalen Reagor.”

Adam Caplan: “Just watching the practice, I had heard they had been very light, even lighter than usual. You’ve talked about how fewer practices they had, because of this agreement they had with the players to get everybody to show up, no mandatory minicamp. And also, they’re ending a week earlier than all of the other 31 teams. The Bengals are the only other team not to have a mandatory camp, but they’re still ending next week.”

Mosher: “I’ve come across almost zero coaches at any level of any sport in my lifetime that prefer fewer practice time and fewer practice hours…Obviously the Eagles are following a blueprint. A lot of this is brought from the Rams mentality of lighter practices, but the Rams are having more OTAs than the Eagles are…I looked at the clock and we were 50 minutes into this hour and 10 minute practice, and all they had done was stretching, positional drills, and special teams. We did not see 7 on 7 or anything mildly competitive until the final 20 minutes of the practice and that was just it.”

Caplan: “The one thing we would find out from people last year was he would rarely look off the safety, which is not good. He had one on the Wednesday practice where he looked left, he looked the guy off, and he threw right. The ball was not completed. It was a timing route. He threw it, the receiver just could not get the football. The pass was fine. That’s the kind of stuff he’s got to do a better job of and he did it…This is the note I made from our sources: He seems more confident calling plays in the huddle and around players. Again, with him, it’s mechanics. You made a comment when you and I were standing there about him not bailing the pocket, which is something he tended to do last season. It was 7 on 7, but on this practice on Wednesday, there were some times, because he was playing with mostly backups, that the guys weren’t getting open then he would break the pocket, which you would understand.”

Mosher: “In 7 on 7, when you know that your objective is to continue to work on being a pocket passer and there’s no sacks, and they’re not even blowing the whistle after five or six seconds, there’s no wide receiver who is in a training camp who can’t get open after five or six seconds. It’s impossible for all of your defensive backs to stick with all of your pass catchers. That play where he did roll to his right, I kept thinking to myself just stay in the pocket until you find the guy, because that’s what you’re trying to work on. But it’s just one play.”

Mosher: “It’s a challenge because he has not played right guard for the Eagles and also he’s coming off of this Lisfranc injury with the two surgeries he’s had to have on his feet. I wonder if in the back of his mind, he sees the writing on the wall and knows that Jack Driscoll is also battling out there. I just wonder what his mindset is right now.”

Caplan: “He’s first man up and they’ll get through training camp. But as I said weeks ago, I can’t see anyway he’s on the roster if he doesn’t start. You can’t pay him $4.97 million to be a backup. They’d obviously try to trade him not cut him, they don’t need the cap space.”

Mosher: “It’s not like Nick Sirianni is devoid of responsibility. He hears every single play that’s called. He has veto power. If he didn’t like something, he was going to weigh in on it. It was good for him to come forward and say it. He was not the playcaller for the Indianapolis Colts. It’s not like his playcalling acumen is what got him the Eagles job. I don’t think Nick felt the pressure that he had to call plays and I think it was smart of him when the team was at its worst moment to say, ‘I need to be a little bit more hands on here with all departments.’ I would be more skeptical of all of this if Nick Sirianni was a playcaller to begin with and was giving up after half a year.”

Caplan: “I was talking to another NFL offensive coordinator who calls plays and is very close to Steichen and he said he’s super smart. Behind the scenes he’s very vocal in meetings and has great command with players. I thought that was interesting.”