With mandatory minicamps nearly underway, the Eagles will begin a long and arduous three-month evaluation process to determine their depth chart for the upcoming season.

While most starting roles appeared to be etched in stone, a handful of starting jobs are up for grabs. Let’s look at three positions that figure to be focal points throughout the summer months. 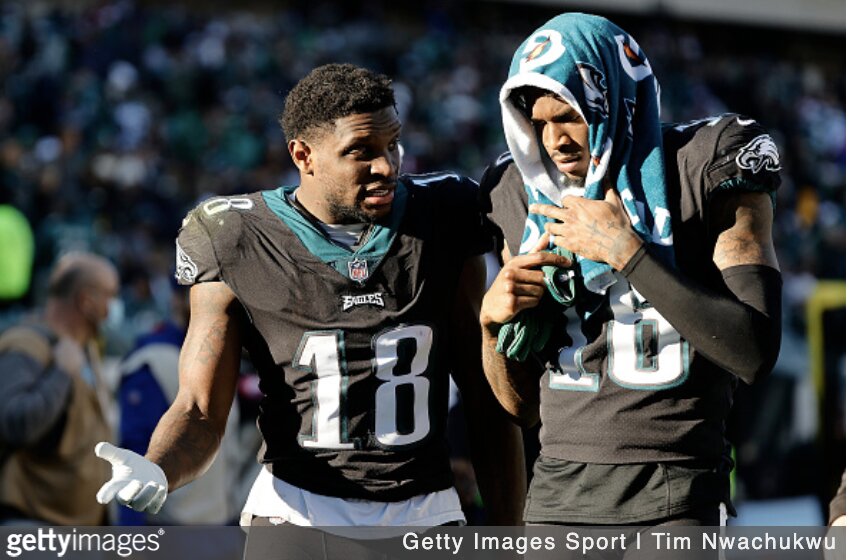 Quez Watkins, Jalen Reagor and other Eagles WR will complete for the slot job.

Among the most pertinent questions the Eagles must answer this summer is who will line up at right guard when the team travels to Detroit for a Week 1 clash with the Lions.

Following years of stability with Brandon Brooks, who retired this offseason, the team initially pegged the oft-injured Isaac Seumalo as a viable replacement. However, while the seventh-year pro remains in the discussion, Seuamlo will be challenged by a host of young players vying for an opportunity to state their respective cases.

It should also be noted that Nate Herbig, who would’ve been a strong candidate, was waived by the Eagles last month and claimed by the New York Jets.

There’s Sua Opeta — a player the team clearly likes — who has appeared in 18 games (4 starts) over the past two season but has yet demonstrate the consistency to inspire optimism about his chances of climbing the depth chart.

Jack Anderson, a 2021 former seventh-round pick of the Buffalo Bills, is an intriguing name to watch, as the Eagles plucked him off of Buffalo’s practice squad early last season only to stash him as a weekly inactive.

Perhaps a full season, and offseason, of working with renowned offensive line guru Jeff Stoutland will put Anderson in the conversation for a more prominent role in 2022.

Kayode Awosika, a former offensive tackle at the University of Buffalo who signed with the Eagles as an undrafted free agent following the 2021 draft, had his moments at guard last preseason and spent the entire 2021 season with Philadelphia.

Not sure he’s a starting option at this time, but it’ll be interesting to see if he’s able to build off of last season’s transition.

The most obvious choice, in June,  is Jack Driscoll. The third-year pro from Auburn gives the team the optionality to play right tackle in addition to guard, and has performed well when available, although that tends to be infrequent.

While Driscoll may be the best Eagles’ option right now, his move inside might not be sustainable. Driscoll, who has struggled with injuries, doesn’t boast the prototypical frame required to withstand the rigors that come with playing  inside.

With A.J. Brown and DeVonta Smith entrenched as starters, one of the more intriguing camp battles to watch will be the one that decides the No. 3 option.

For many, myself included, the pecking order presumably appears cut-and-dried. Beyond Brown and Smith, Quez Watkins would be the most logical complement.

Last season, the third-year wideout hauled in 43 receptions for 647 yards and a touchdown amid a streaky passing game. Furthermore, the 6-foot, 194-pound speedster, who rarely aligned on the inside prior to last season, thrived in an unfamiliar role and steadily improved throughout the season.

Watkins also proved to be the Eagles’ most efficient receiver in terms of reeling in contested catches. While I hardly view Watkins as a volume-based pass target, his speed to threaten teams vertically, knack for finding openings in zone, and willingness to fight for the ball in traffic is what the Eagles need from its third option.

Jalen Reagor makes for an interesting case. The maligned third-year receiver has yet to realize the tantalizing upside that constituted the Eagles selecting him in the first round, and he now has a pair of worthy adversaries in Watkins and free agent addition Zach Pascal who threaten his place on a suddenly crowded depth chart.

I’m not sure Reagor will ever win the traditional way, with savvy releases, nuanced route-running, and consistently knowing where to be. I envision him settling into the role of a sparsely used gadget player in another offense — one who’ll make the occasional splash play but be far too volatile to undertake a more prominent role.

As it stands, he isn’t a better option than Watkins or Pascal, pedigree notwithstanding. Both the Eagles and Reagor should welcome a fresh start.

I mentioned Pascal, who I thought was a valuable addition, as someone who could potentially cloud Reagor’s pathway to playing time. The former Colt has played in 64 career games (44 starts), and caught 150 passes for 1,888 yards and 15 touchdowns.

Along with Brown, Pascal (6-2, 214) also provides some much-needed size to the receiver room. The Old Dominion alum doesn’t offer much in the way of explosiveness like Watkins, but he is a tough, hard-nosed pass-catcher who will come up with contested catches in traffic and seal the perimeter with his blocking.

Still, I view Pascal as more of a No. 4 who can contribute situationally.

The Eagles have essentially adopted a status quo philosophy when it comes to this position.

While the latter was retained, the team failed to address McLeod’s absence, especially after striking out on free agent Marcus Williams.

Instead, fourth-year pro Marcus Epps, in all likelihood, is primed for a promotion.

What Epps lacks in terms of high-end fluidity and athleticism, he compensates with football intelligence, anticipation, and toughness. I have Epps ahead of his challengers by a country mile, barring a trade. But he’ll certainly have to perform at practice to cement the position.

If there were another player on the roster pushing Epps for a starting spot, it would be K’Von Wallace, a former fourth-round pick who could ultimately wind up being a beneficiary of circumstance.

Wallace has done little to solidify a role as the No. 3 safety, let alone start, as injuries and limitations have surfaced in his various opportunities over the past two seasons.

Perhaps Wallace shakes the one-dimensional stigma and seizes the opportunity in Year 3, but from my vantage point, the former Clemson defensive back is best suited to be a core special teams contributor and sub package defender.