From Mobile To Indy

The Senior Bowl is in the books, and several players helped themselves with standout performances in their first showcase of the draft cycle.

With the Eagles looking to invigorate their roster with young talent and future building blocks, hitting on their picks in this April’s NFL Draft is critical and their haul will be assessed under intense scrutiny.

Let’s take a look at six prospects who emerged as winners from Phase 1 of the draft journey: 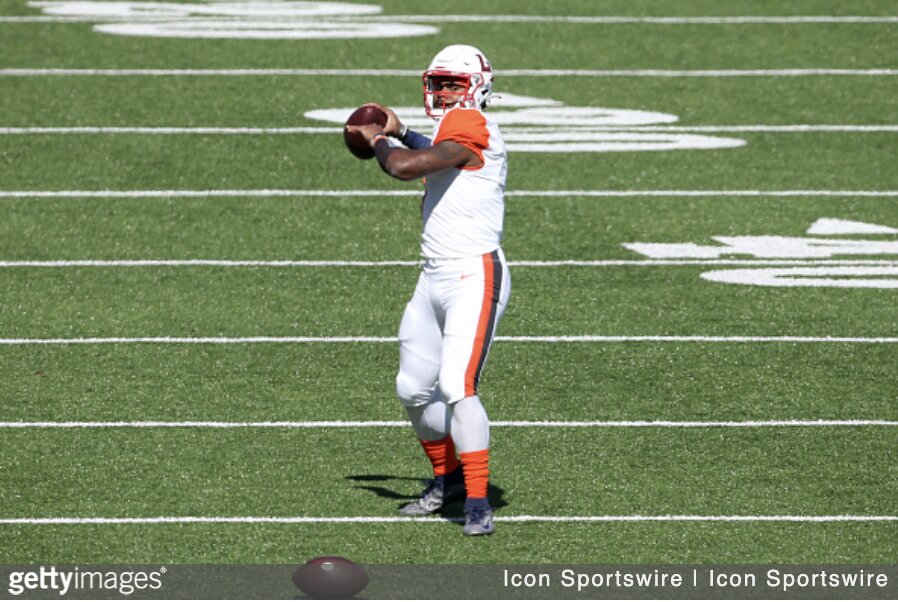 Malik Willis upped his stock at the Senior Bowl

Willis’ game stats – 2-of-4 for 11 yards – were a distant third to fellow American team quarterbacks Bailey Zappe and Sam Howell, but the Liberty product is generating buzz on the heels of a standout week in Mobile. Showcasing improved ball placement, processing and consistency to complement his rocket-launcher of an arm, Willis checked off some critical boxes at the Senior Bowl under intense scrutiny and suddenly finds himself vying with Kenny Pickett to become the first quarterback selected in April.

Johnson, 6 foot 3, 316 pounds, played guard and tackle at Boston College, but his home at the next level figures to be at guard. Among the week’s many interesting developments, Johnson, who was named Senior Bowl Practice Player Of The Week, demonstrated his versatility in practices by trying his hand at center and faring well. Along with his inherent versatility, Johnson’s athleticism, strong hands, and lateral fluidity has put him contention with Texas A&M’s Kenyon Green to be the top interior offensive lineman in this class.

This year’s Senior Bowl MVP, following a performance that included a pair of sacks and three tackles for loss performance in Saturday’s game, Winfrey logged 23 tackles (11.0 for loss), 5.5 sacks, and a forced fumble last season for the Oklahoma Sooners. He boasts tremendous length and an explosive first step off the ball. He’s also a fluid mover who can win with power at the point of attack, but can also stand to add another 10 pounds to contend against many of the interior maulers he’ll encounter. That said, if Winfrey’s able to carry over his Senior Bowl showing into an impressive NFL Combine, he might just creep into the back end of the first round.

Mafe produced 34 tackles (10.0 for loss), seven sacks, and a forced fumble for the Minnesota Golden Gophers last season. His two-sack, three-TFL performance in the Senior Bowl garnered National Player of the Game recognition. The 6-foot-4, 265 pounder is a quick-twitched edge rusher boasting an enticing blend of innate athleticism and lateral agility. His explosive burst is a sight to behold, and I expect his stock to soar throughout the cycle, as Mafe is primed for eye-popping testing numbers at the NFL Combine. He’s a bit raw in some areas, but Mafe has the ability to become one of the top edge rushers from this class in time.

Luketa wreaked havoc as a pass rusher in Saturday’s game, collecting two sacks, and offers the intangibles to play multiple positions at the pro level. The 6-foot-3, 247-pound linebacker provides sideline-to-sideline range, instincts, and flows to the ball with urgency, while winning with leverage, power, and hand usage as a rusher. Surprisingly, Luketa outperformed his more highly-decorated Nittany Lion teammate, Arnold Ebiketie, in Mobile. Luketa will have a prime opportunity to showcase his athleticism at the NFL Combine, and is one of my favorite under-the-radar prospects in the draft.

Primarily acting as a heat-seeking missile in the box at Baylor, Pitre  also doubled as an effective slot defender for the Bears. While it remains to be seen how his physical nature translates to the pro level given his body type, Pitre showed he possessed a much deeper arsenal than his Baylor career suggested. The 6-foot, 197-pound safety thrived in coverage throughout the week, demonstrating terrific short-area quickness, instincts, ball skills, and closing speed. Pitre’s versatility makes him a fit for any defensive scheme, and he helped his stock immensely.